We help get you through your divorce
in the least acrimonious way possible.

We are saddened by what is happening with the coronavirus. Our hearts go out to all families affected by it. We hope things return to normal as soon as possible. Meanwhile, contrary to rumors, COURTS ARE OPENED FOR BUSINESS. The only change is that, for the moment, it is mandatory for attorneys to attend hearings via phone or streaming.

We do case intake online. There is no need for you to travel t our office for any reason.

Today, March 16, 2020, we are working on a solution for our clients to get notarized online rather than having to travel to our office or other notary.

This means we can file your case and your judge will decide on it without you ever leaving home.  Call us for details: 702-420-7052.

Obtaining a Divorce With Children in Las Vegas

Link to Nevada divorce statutes that pertain to CHILD CUSTODY

Link to Nevada divorce statutes that pertain to CHILD SUPPORT

Basic Requirements for a divorce with children who reside in Las Vegas:

Nevada Residency for children in a Nevada divorce:

Nevada District Court only takes jurisdiction over children that have lived in Nevada with you for a minimum of six (6) months. At that point, Nevada is considered the “home state” of the children and the Court will pass rulings on physical custody, visitation, and child support.

EXCEPTION: If you can show an “emergency” under the Uniform Child Custody Jurisdiction Act, a Nevada judge can make rulings over children who have not resided in Nevada for six months. Such cases can become complicated. In order to protect your children’s rights and your own rights, we highly recommend that you contact us so that Attorney James E. Smith can advise you on your best course of action.

If you find it difficult to make a decision regarding physical custody, visitation, and child support , consider addressing those issues with a professional, licensed, mediator before filing your Nevada divorce.

Many divorcing people with children (and, or, with property to divide),find that they benefit greatly from meeting with a mediator prior to filing their divorces.

Through the mediation process, you’ll come to decisions regarding your children that work for both parents and, most importantly, for the children. Leaving it up to a judge in a divorce trial, as well-intentioned as she or he might be, never makes anyone happy because the decision is made by someone who knows little of you, your children, and your life.

Mandatory Cope Class:
Both parents must attend a COPE class. If one of the parents resides out of the State of Nevada, then an effort to find a comparable class in another state must be made. If none can be found, then a Motion for a class waiver must be filed with the Court. In all cases, the class will be waived for Defendants who resides outside the U.S.

If you both live in the same city in Nevada, you may take the class with your soon-to-be ex-spouse, or each of you can take it separately, as long as you take it. Each of you will need to file your Certificate of Completion with the Court.

If one of the parties to a Nevada divorce refuses to attend a COPE class, he or she can be held in contempt of court — and a judge can withhold visitation until the class is completed.

Child Support Guidelines:
This simple chart should help you easily figure out the amount of child support you would be expected to pay should a judge make the decision for you. You can, of course, pay a higher amount if you wish.

In any deviation from the table below (higher or lower amount), the Court takes into consideration the following factors (NRS 125B.080)

(l) The relative income of both parents

EASY FORMULA TO FIGURE OUT YOUR CHILD SUPPORT OBLIGATION:

Physical Custody of Children:
When filing a divorce in Nevada, customarily, both parents assume legal custody of their children, no matter with which parent a child spends the most time. To take away legal custody from one parent, you must prove that the parent in question is dangerous to the well-being of the child in some way.

Visitation:
If you opt for one parent only to have physical custody, you’ll want to establish visitation for the other parent. There is no absolute rule here, just whatever is best for the children and works for both parents. Again, it’s always best to make this decision yourself. If a Nevada judge makes the decision for you, it’s likely that visitation will be either every weekend, or every second weekend.

Medical Insurance Coverage:
It is pretty much expected that at least one parent provide the children with at least basic medical coverage. If you cannot cover your children with health insurance, have an explanation to enter into the Joint Petition or Complaint for Divorce.

Are you going through a divorce in Las Vegas and have children under the age of 18? We can help with that. Attorney James Smith has 25+ years of experience representing parties with children in their divorce. You’ll pay a low flat fee only unless your divorce becomes contested. We process divorces as quickly as possible while maintaining an eagle-eyed professionalism so nothing is forgotten in the paperwork.

If you and your spouse are still uncertain how handle issues of child support, physical custody, and visitation, or if you are unsure about how to divide property and debts, consider a divorce mediation followed by a joint petition divorce. This is the least acrimonious, and least expensive way to divorce. 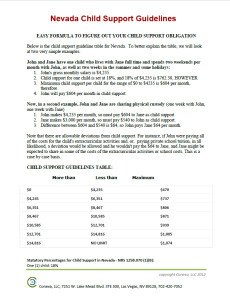 Both Parties Must Sign
$599+ filing costs
Get Started Now

Only One Party Signs
$1299 + filing costs
Get Started Now

Free Consultation for Those Who Wish to Retain a Lawyer

If you cannot afford an attorney, please reach out to legal aid. They will help you.

* Court filing fees and administrative court costs add up to $328 for joint petition divorce ($342 with children), and $364 for a Complaint for Divorce. Cost of process service and publication (when the other party won’t sign or cannot be found) is additional. U.S. average cost is $160 for process service ($125 in urban Nevada); publication $150. Process service outside the US.: costs vary by country and are individual to each case.